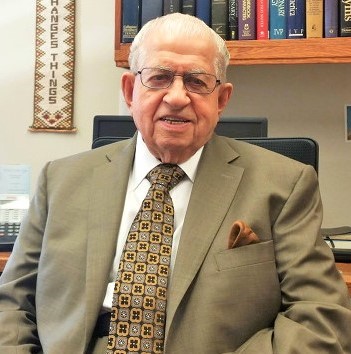 Harold E. Salem was born near Belle Fourche, South Dakota and graduated from Belle Fourche High School. He earned a Bachelor of Science degree from Black Hills State University. He graduated from Northwestern Bible School and Seminary, Minneapolis, Minnesota where he earned the Bachelor's and Master's degree in Theology. He also earned the Doctor of Ministry degree from Northern Baptist Theological Seminary, Lombard, Illinois.

In August 2010, he resigned from First Baptist so as to give full time to the Christian Worship Hour which began in January, 1979, by telecasting the worship service on a single TV station, KABY-TV. In August, the service was moved to the studios of KABY-TV and today is on World Harvest, Daystar, FETV, GEB network, Cowboy Channel, CW+ and TCT Networks along with 100 other stations reaching homes across America. Middle East TV (METV), Daystar and Gospel Network carries the service worldwide.

The service is also carried on shortwave radio by three antennas that literally go all around the world.  CDs and DVDs are also available.

The services and devotional videos can also be viewed on the internet via desktop and laptop computers, along with tablets and smartphones.

Some areas where Pastor Salem has served:

He has four children: Sharron, Daniel, Patty, Michael, 12 grandchildren and 13 great grandchildren. His wife, Beulah, went to be with the Lord on Christmas Eve, 2005. Of her, Pastor Salem writes, "If I have attained any good in this life it is because of the help of Jesus Christ and my dear wife, Beulah, who stood by me, believed in me, encouraged me for 59 1/2 years and without whose loving help I could not have run the race."